In this tutorial we will show you how to deploy a .NET API on top of Seaplane Global Compute. In the interest of keeping this tutorial simple (and saving us some time) we’ll be patterning our how-to after this AWS doc on deploying a fairly standard .NET API.

For this tutorial, you’ll need:

Build (or Borrow) Your API

First things first, we need something to deploy. If you already have an API you want to deploy with Seaplane feel free to use that, but if you’re just interested in testing our platform, Microsoft Visual Studio includes sample projects you can use. We’ll be using one of those sample projects for this tutorial.

If you don’t have Microsoft Visual Studio you can grab the project files from our GitHub repo.

To use a Visual Studio sample project, open Visual Studio. Select Create New Project and choose API from the list of options. We’re going to name our project DemoNetCoreWebAPI just like the AWS tutorial. 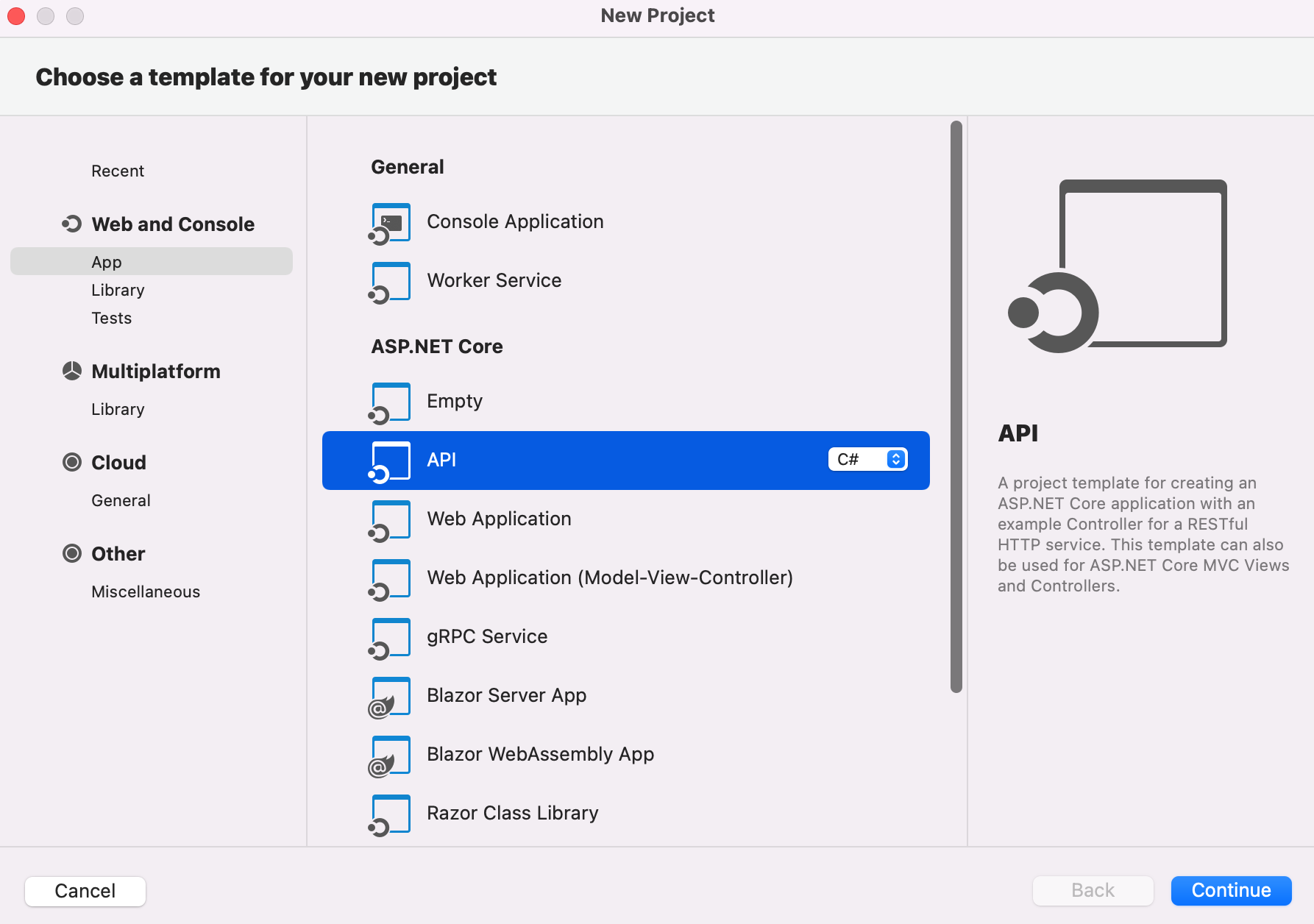 Creating the API in visual studio. Your interface might look different depending on your operating system.

Press F5 (or FN + F5 if you’re working on a mac) to run the project locally. Once the build finishes, it should open a webpage with the Swagger interface. Before we go any further, we’ll confirm everything is working by querying the API. Once we’re sure everything is in working order, we’ll proceed to the next step.

Now that we have a sample API, let's go ahead and containerize the workload. Navigate to the project directory — generally, this is ~/Projects/DemoNetCoreWebAPI. Create a new file called dockerfile and copy and paste the code below. Note: you may need to update the aspnet and SDK versions depending on when you’re following this tutorial as we, unfortunately, cannot predict the future.

We create the docker image by running the following command inside this directory.

In the same directory, run the following command to spin up your newly created container listening on port 80. We do this to quickly confirm everything is working before we move on to the next step.

We can also test the API by querying it using Curl.

If you receive a list containing a JSON string of temperatures then congratulations! Everything is working as intended and we’re ready to deploy our application on Seaplane.

We are ready to build, tag, and upload our newly created container to the Seaplane Cloud Registry. To do that we need to run these three commands in the directory with our dockerfile.

Running on an M1 Mac?

ARM-based images are currently only supported on AWS. If you are working on an ARM-based system like an M1 Mac and want to have access to all available cloud resources you should build the image using X86 architecture using the --platform linux/amd64 flag.

Make sure to change <you_org_name> with your organization's name i.e. the name you used to sign up for Seaplane.

Now that our image is uploaded to the Seaplane registry we can build a flight. You can read more about flights, formations, and other Seaplane terminology in our docs, but to make a long story short: a formation is an application or service which is made up of logical containers we call flights. Flights (logical containers) → Formations (application or service). What can we say? We like planes around here.`

First, we’ll create a flight plan locally then we’ll add it to a formation in preparation for deployment. A flight plan is exactly what it sounds like: a set of rules for our flight to adhere to. This can include the number of instances, provider restrictions, location restrictions, and much more. For now we’ll keep it simple and only change the name, leaving all other values set to their defaults.

Never deployed on Seaplane before?

If you have never deployed a workload on Seaplane before, it might be worth going over a few quick questions to help you decide what kind and how many resources you want to dedicate to this workload. You can read more about it here.

To add the flight to the flight plan we run the following command. We use the --name tag to make it easy to identify the workload internally, but that’s entirely optional:

To add the flight to a formation and deploy it globally, we run this command:

Let’s pause and take a closer look at the snippet above.

We created a new formation and named it net-api-example-formation . We then added our previously created flight plan to that new formation and added port 80 to the public endpoints that are available on the / path. Finally, we launched the formation using--launch.

Seaplane will spin up a container globally with your API and return the relevant URL, like this:

If done correctly, querying the URL using curl will return the same result as it did locally, but because it’s been deployed with Seaplane it will now be globally available to all your users, no matter where in the world they are.

Seaplane will automatically adjust deployment size (machine spec) and location based on user demand, so you don’t need to select any regions or provision any hardware. Seaplane will also take care of all the load balancing and autoscaling (both horizontally and vertically) for you.

This tutorial looks pretty similar to that AWS EC2 tutorial we mentioned earlier. They both cover the same topic, they’re both relatively short, and they both look simple at first blush. However, where Seaplane really is as simple as this tutorial implies, that EC2 tutorial skips over a few important steps and uses a pre-configured file of 100+ lines of YAML.

In fairness, Seaplane is a fully managed platform and EC2 is not. Nor does it pretend to be! However, deceptively simple tutorials and diagrams can give users the wrong impression about how much time, money, and resources will be required to stand up their infrastructure using a solution like EC2.

Take a look at the basic YAML template provided to set up 2 compute instances in two availability zones with an internet gateway in between. All that YAML (over 100 lines) and users still need to either configure the gateway or add a load balancer on top. Now imagine if, instead of two availability zones, you want to add a third availability zone, or an entirely new region. The YAML is endless!

We’re not trying to pick on AWS here. AWS has a lot of excellent services, and every provider likes to keep tutorials simple. However, it’s important to know how much work needs to happen behind the scenes to make these services work. If you don’t have a large platform engineering team with a lot of provider-specific devops experience, even doing something simple — like deploying a standard .NET API — can become really challenging really quickly. This is especially true if you want to deploy in more than one region or on more than one provider.

We built Seaplane specifically to make that multi-region, multi-cloud part easy. Load-balancing, scaling, VPNs, and redundancy are all built-in features for every workload on Seaplane Managed Global Compute.

If you were following along with this tutorial your app is now available across every region on every major public cloud with a single API call. No YAML required.

Updated about 1 month ago

Did this page help you?